The Allure of Mills

What is it about passing an old mill building that pushes me off to some other world?  I pause, take a second look and a third, fourth, and more, drawn in by the features of the bell tower and stairways, the small design additions to the windows, doors and roofs.  Then my gaze wanders, looking for nearby streams and crossings, homes and paths.

Surely, the easy answer to the appeal would be the size and sturdiness of the buildings, made of brick and stone to withstand the pounding of the machinery and the risk of fire.  They don’t tower over the landscape as much as they dominate it.  Aerial views and maps show just how much space they occupy in a neighborhood, easy to pick out and get your bearings, in search of an old house or store.

The simple engineering behind raising such a structure had to be, in fact, anything but simple, especially without the mechanization and materials that go into modern construction.  Add to that the number of mills in Berkshire County which reaches well into the hundreds, and the speed which they went up, or were later added on to and altered to make full use of new equipment.

Curiosity cannot be satisfied.  How did they bring the heavy iron equipment into the mills?  How did people learn to operate the machinery?  How were people hired and what were employers looking for in selecting the operators?  How would they move one processed item completed on the second floor, up to the next stage on the third floor?   How did they find their markets, and get their products to them?

But the wonder of the mill really comes from imagining the stories, of the people who heard the bells, hustled along the paths, made their way to their spots at the machines, stood by them and repeated the same motions for up to twelve hours a day.  I realize that I probably wouldn’t, couldn’t last a week.

Ten years ago, I bought a house in Pittsfield, before I realized that my neighbor was an old mill, that a canal and reservoir that fed water to power the mill ran so close to my windows that I could hear the rushing water at night.  I could likely have heard the mill bell from my window, as did those who inhabited my house 100 years ago, sending them down some path lo 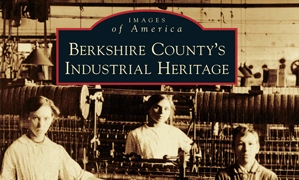 ng since grown over to get to work on time.

All this propelled me to put together a book, of historic photos, architectural drawings and maps which give a glimpse into that world.   Enjoy the dream.

You can find a copy through Arcadia Publishing.

This entry was posted on July 7, 2017, 1:58 pm and is filed under Berkshires, History in our surroundings, Personal memory, Preservation, Public History. You can follow any responses to this entry through RSS 2.0. You can leave a response, or trackback from your own site.