Imagine the conversation that Hillary Clinton had with her Information Technology people when she started her job as Secretary of State.  First of all, she probably didn’t have one, but her staff did, on behalf of her wishes.  “The Secretary does not want to have an official account on the State Department system,” they would have said.  “She will use her own private e-mail and server for her electronic communications.”

Loyally, like most in the Department, the professional IT folks nodded and went to work to MAKE IT HAPPEN.   Their concerns, if they voiced any at all, would have fallen in the security arena.  What they likely did not say was anything about the need to keep a historical record.

The reality is that for most of the communications coming from the Secretary’s office, she relied on her staff who probably all had official accounts, as well as their own private mail.  As Gail Collins points out in her op-ed in the New York Times, the former Secretary’s reference to 60,000 e-mails during her tenure turns out to be roughly 40 a day.   It’s not inconceivable that her many staff churned out more than that on her behalf in ten minutes.  All of those messages are, we can assume, on the official system.

The problem with the exclusive use of private e-mail that many of her would-be detractors are focusing on is, incredibly, Benghazi, and then security.  However, by deciding what the public should and should not see, the former Secretary simply leaves to the imagination what will not see the light of day.  Ms. Clinton says it is personal material, and undoubtedly there are plenty of those.  Likely there are also messages related to her past and perhaps future status as a politician, interacting with the large retinue of friends and donors, responding to their requests for favors, small and large.  Not unusual for any politician holding any government office.

Surely Ms. Clinton or someone on her staff must have realized the historic value of her documents, if only for her memoir that she was sure to (and did) write.  Why save documents only for her book?  She makes the claim that her business e-mails to those in the Department could be accessed through the recipients, but she did not send e-mails to just other State Department officials.  Further, if her staff were using official accounts in sending e-mails to carry out her instructions, it is unclear who would know which of these messages were valued for the historic record.

It’s not just the absence of the former Secretary’s communications that presents a challenge to future historians.  While no one is suggesting this as a reason for her foregoing the State Department server, the chilling effect of leaks (such as Wiki-leaks or Snowden cases) on official communications is taking a toll on the written record.  Rather than write cables, the use of e-mail is more pervasive and when the issue is very sensitive, phone calls are taking over as the medium of choice. 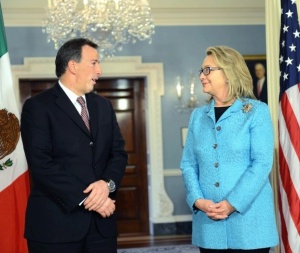 What Secretary Clinton’s private e-mail use also encapsulates is the broader issue of how the Department of State does not take full advantage of its own history in the conduct of the country’s foreign relations.  To their credit, it was staff in the Office of the Historian that first brought this issue to light, in seeking to gain access for its archives to these documents.  That Office and their on-line presence, through its series on Foreign Relations of the United States, has made available 450 volumes of primary source documents that have been declassified and, most recently, has begun to include material from other foreign affairs agencies.   These represent an invaluable resource for scholars of U.S. foreign policy.  However, it is mainly academics who mine these documents for their research.  Based on my experience in the Department few of us working the multitude of issues confronting the nation in our overseas relations, drew on that resource.  We did not have the time, the inclination, the skills to mine those documents as another source of “intelligence” to analyze the countries or the topics we were handling.  The fact that the Historian’s Office is located in the Bureau of Public Affairs is a tip-off that its focus is external, not to inform current foreign policy issues.  Perhaps the Bureau of Intelligence and Research where reports could be made for policy makers?

Our military devotes incredible effort and resources to learning its own history, and values history in its academies and its in-service training.   They read the communications of soldiers in the preparations for battle as well as on the battlefield to understand the decisions taken.  Our diplomats deserve the same attention to their history, to equip them to understand the complex, messy terrain of our relations around the world.

This entry was posted on March 17, 2015, 2:15 pm and is filed under History ahead, International, Personal memory. You can follow any responses to this entry through RSS 2.0. You can leave a response, or trackback from your own site.