Tear Down That Wall

Is there information overload on Bin Laden’s death?  Well, here’s another thought, looking at the last ten years with an eye to future history.

First, let’s not forget the last ten years.  Let’s not forget what it has been to live with a Bin Laden at large, with a huge impact on our lives, from direct trauma to major inconvenience.  One of the most frequent questions heard in interviews this past week on the talk shows was “Did you ever think we would see this day (when Bin Laden was eliminated?)”   I bet a poll would show that most people thought that we would never find him.  And still, most people think his demise will have little influence and that we are going to live with terror and our heightened state of alerts from now on.

Yet, years from now, it may look like it was foreordained that we would capture Bin Laden and that his reign of terror would naturally come to an end, but when we are living in the middle of it, it is hard to imagine such an outcome.

Second, let’s hope that his demise has the same impact that capturing Abimael Guzman, the leader of Shining Path in Peru, had on that country emerging from decades of terrorist attacks and a resulting “under siege” mentality.    I moved to Peru just several years after his capture and over the following couple of years saw the country transform itself, and gradually return to normal living.  Yet, the mark remains, as Peruvians lived through the worst and fear developments which could constitute a return.

A similar transition occurred in South Africa, where I also witnessed first-hand the demise of apartheid and the violent resistance to it.  Almost overnight, following the release of Mandela and the unbanning of the African National Congress, the security at airports, movie theaters and shopping malls came down, curfews were lifted and troops left the townships.

The fall of the Berlin Wall also ushered in a more relaxed atmosphere, an unthinkable event just a few years earlier.  Prior to 1989, many of us thought we were living in a permanent state of tension, between East and West.

Is it too much to think that one day the security at our airports will also be removed?  Relaxed?  That our troops will come home from Iraq and Afghanistan and that we could enjoy the same kind of peace dividend we earned during the 1990s?

Tear down those walls, those jersey barriers, those screens, those magnatometers! 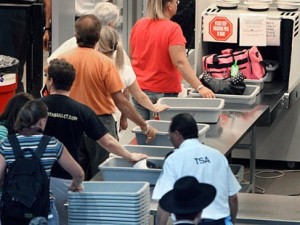 This entry was posted on May 7, 2011, 12:33 pm and is filed under International, Public Affairs. You can follow any responses to this entry through RSS 2.0. You can leave a response, or trackback from your own site.