Are we still fighting the Civil War? 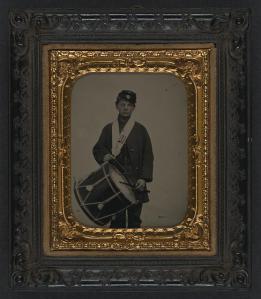 From The Last Full Measure: Civil War Photographs from the Liljenquist Family Collection

Probably not, if the fighting is “kinetic” to use a current Defense Department term.  And yet, few will deny that the tensions which gave rise to the fighting 150 years ago are still present in contemporary America.   Whether it is the sparks over the confederate flag, or statues on university campuses and town squares;  the omission of references to slavery by a current Governor in remarks about the Civil War  or proposals to repeal the 14th Amendment which made citizens of “all persons born in the United States,” those tensions still linger close to the surface.

Last week, in the commemorations marking the 150th anniversary of the firing on Ft Sumter, we faced those tensions again.

A few random questions on the war from 150 years later.

— What is its name?  We can’t even agree on the name of the war.  Southerners may call this the War between the States or the War of Secession, but I’ve never heard anyone from the North call it anything but the Civil War.   And come to think of it, there’s nothing civil about this war at all.

— When did the war begin? We may actually have been marking the wrong date as the beginning of the war.  Almost lost have been the first shots which took place, also at Ft. Sumter, but on January 9, 1861 when a northern resupply ship called “The Star of the North” was fired on by cadets at the Citadel, sending the ship back to New York.

— Was the war fought in black and white?  Since I am old enough to remember the centennial, my first memories are from the photographs, of Lincoln, his Cabinet and his generals, of the dead on the battlefields, of John Wilkes Booth and John Brown.  With these black and white ambrotypes and tintypes etched in my mind from a young age, it’s hard to imagine the war fought in living color, or even three dimensions.   The beautiful, pastoral color scenes in Ken Burns PBS series on the Civil War stand in stark contrast to the harsh black and white photos from that war.  The current exhibit of soldiers’ photographs at the Library of Congress (The Last Full Measure) show stiff, slender and sometimes frail posed soldiers in coarse clothing and uniforms.

— Does the Civil War sell well?  You bet it does.   On April 12, The Washington Post had a full section devoted to the start of the war, for which they had no trouble getting advertising.   PBS re-ran the Ken Burns special on the Civil War; a stop at a Virginia tourism center has a whole section dedicated to visits to battlefield sites (“over 60% of the battles were fought in Virginia,” we were told); the Civil War section at any bookstore or library is larger than any other US History; Robert Redford’s movie The Conspirator on Mary Surrat drew large crowds in its first weekend .

Recommended reading:  Confederates in the Attic, a slightly humorous look at the “unfinished war” by Tony Horowitz.  Two thoughts from the book: one in four Southerners are direct descendents from people who fought in the war, while the figure is closer to one in ten in the North; and a quote from a park ranger at one of the battlefield parks: “One guy even asked me why so many Civil War battles were fought  on national parks.”

This entry was posted on April 21, 2011, 11:55 am and is filed under Civil War, History in our surroundings. You can follow any responses to this entry through RSS 2.0. You can leave a response, or trackback from your own site.