A Third of Your Lifetime

So, you think you wanna go back in time for just a short while?  Better hope that it’s just not an overnight!   Not unless you don’t care about comfort.  Or sleep free from worrying about what critters might be crawling around in the mattresses.

I found out more than I cared to know of from a current read of another of those books in the Founding Father genre, but this one with a twist: a Founding Mother.  It’s Betsy Ross, and the Making of America, by Marla Miller.  Unlike the other Founding Father books, Miller doesn’t have a lot of newspaper, broadside or even correspondence and memoir of the actual person, but she does sew together a story of period, including the crafts and trade world Betsy Ross inhabited.

Betsy landed her first job when, in her teens, she visited her sister in an upholstery shop and ended up finding herself employed as well.  Miller describes the stuffing and stitching of mattresses, with feathers (okay), wool (not so bad either) and hair (hmm, take a pass).   It’s the last option which seems to have been, while not preferred, maybe more accessible, with use of horse, cattle and dog hair curled and stuffed into the fabric which upholsterers like Betsy then stitched together.

Oh, did I mention sterilizing the hair, because of the possibility of bugs?  Sure enough, but did it last?  Miller unearthed some advertisements for various remedies to rid your bed of the bugs: “Even if your pests ‘swarm ever so much,’ a thorough dousing of the bed and bedding ‘will infallib’y kill and destroy both them and their Nitts.”  Better go out right now and get some of that potion.  Unless you want to take your mattress back to Betsy at the upholsterer’s and get it “refreshed.”

All this assumed you even owned a bed, whose cost may have put it out of reach for those without means.   Miller costed out a 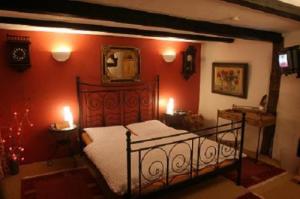 complete bed, furniture and mattress, pillows and curtains at £23, compared with a sixteen-acre lot of land at £10.  In today’s prices of about $5000 an acre, that would make my bed worth more than $160,000 dollars.  Might be time to get an e-Bay account and sell my bed!

It reminds me of the time when we bought our first new mattress.  The salesman’s pitch was to make the investment on where you spend a third of your lifetime.

This entry was posted on April 10, 2011, 2:54 pm and is filed under Colonial, History in our surroundings. You can follow any responses to this entry through RSS 2.0. You can leave a response, or trackback from your own site.