After Sonos, what’s next?

One of the running conversation games played in my house goes like this:  which generation has seen the most amount of change in its lifetime?  The discussion usually happens after watching some old episode of Seinfeld where Jerry’s doing body building by lifting his cell phone, or some photograph of a professional football player from the 1950s whose physique makes him look like a chess player, rather than a linebacker.

This time, though, it occurred when we bought the latest music delivery system, a Sonos system about the size of a shoebox with a speaker and no other components.  No wires, no amp, no discs or tapes or records.

My own history with recorded and broadcast music starts with the small AM transistor radio and graduates to the Hi-Fi record player capable of playing both 33 rpm albums and 45 rpm singles.  My grandfather had a contraption that could record voices on a disc, and he seemed to favor 78 rpm discs.  There were several drawbacks to these, most notably that you had to stand up and walk over to the record player to turn the record over or to skip a song that you didn’t like.

That you had to listen to all the songs on a record or actually move to skip the one you hated helped sell me on my first tape recorder.  It was a small reel-to-reel machine that could handle tapes of roughly 15 minutes.  These I used and re-used for my own personal playlists.  The low-tech way of recording was to stick the little mic up to the speaker of the record player, but that changed when we were able to master the wire audio in and out connections.  But, I get ahead of myself as I haven’t even touched on cassette tapes or even everyone’s favorite anachronism, the 8-track cartridges.

One advantage of record playing albums still survives to this day.  We pretty much learned how to read by poring over the album liner notes, that were actually written in a type size you didn’t need a magnifying glass for.  You didn’t have to go to a screen to find information about the artist, and you could easily follow along with the lyrics that were often printed on the album cover or sleeve.

The transfer to stereo music — bigger and bigger speakers, with components for an amplifier and a tuner for radio — was about the last music technology that I actually cared to try to keep up with and understand. Hauling one of these to college or to yet another apartment required a small U-Haul.  I can actually remember where I was when I heard my first compact disc, as if it was equivalent to remembering where I was when Kennedy was shot or when Neil Armstrong walked on the moon.   The quality of sound, with no scratches or distortions, and the lack of a needle or tape head picking up the sound made this a true wonder.

To lose the needle was hard enough to fathom; to lose the actual physical thing the music was stored on came next as recorded music leapt from CD to IPOD and phone and file sharing.  Hello Napster and ITunes, goodbye Tower Records.

It’s good business for the industry as people end up scrapping all the components and all the records and tapes they own every 5-6 years.   Then as hip-hop music picks up on record scratching for its edgy, urban sound, we end up looking for the old records and players we used to own, and then going out to buy those again if we no longer have them buried away in our attic or storage units.

All this makes for pretty dramatic change in the course of one life.  Still, my wife is not convinced that this is evidence of more change in our lifetime than in our great grandparents’ who witnessed the arrival of recorded music with the invention of the gramophone in the 1870s.  This shift took a medium that could only be enjoyed live into one that allowed for repeat performances on demand.  What my generation experienced was not so fundamental, since it just changed the nature of recorded music, its delivery system.

So, to ponder this more fully, I’ll go to my phone, find the Sonos App and decide whether to tap into my hundreds of purchased songs on my computer, my account with Pandora for their thousands of songs, or any of thousands of radio stations around the world. 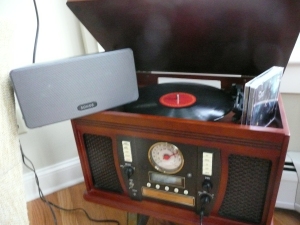 It’s a far cry from listening to Cousin Brucie on WABC-radio.

This entry was posted on March 8, 2014, 9:40 pm and is filed under History in our surroundings, Personal memory. You can follow any responses to this entry through RSS 2.0. You can leave a response, or trackback from your own site.