In 2011, when referring to his approach to the uprising in Egypt, President Obama noted that “History will end up recording that….. we were on the right side of history.”   He could have been anticipating his second inaugural speech this week, when he was on both sides of history, both making it and wrapping himself in several American historic traditions.

History permeated the ceremony.  First of all, he adhered to his Constitutional requirements by having a private swearing-in ceremony on January 20 (as stipulated by the 20th Amendment).  However, he embraced our civil rights history by shifting the public ceremony to coincide with the Martin Luther King holiday.  He used two bibles in taking the oath, belonging to Dr. King and Abraham Lincoln.  The two bibles evoked the history of this year, marking not only the 150th anniversary of the Emancipation Proclamation but also the 50th anniversary of Dr. King’s March on Washington, this coming August.

His speech, like many inaugural addresses, recalled the founding documents of the nation, using their language of “we the people,” “liberty” and “equality,” repeatedly.  He referred to the skepticism of central government and called us to remain true to our forebears and act as “pioneers.”  He mined those documents to placate his adversaries on the right, but also to call to action those who supported his re-election.

Still, more than any other modern President, Obama makes history.  As the first American of African descent to hold the office and to be re-elected to the office, every day he presides over the nation he is making history, whether he is the first President to win the Nobel Peace Prize in his first year of office, the first President from Hawaii or the first to sing Al Green and play basketball in the White House.

Much has been made of his reference to Seneca Falls, Selma and Stonewall, three places which carry deep symbolism for women, African-Americans and gays in their struggle for inclusion in the promise of liberty and equality in America.  He made history by being the first President not only to use the word “gay” in an inaugural, but also to echo the appeal for equality in marriage.

These references, coupled with his remarks related to immigrants, underscored a more important historic transformation in the political composition which carried Obama to victory.  While not the first to see the coalition taking shape, he is the first to ride the new Democratic coalition of minorities, women, gays and their progressive supporters of all shades and persuasions to two Presidential victories.  It is a new Democratic coalition, emerging from the remnants of FDR’s coalition of labor lower and middle classes which had shifted on the issue of race towards the Republicans beginning in the 1960s and solidly in the 1980s era of Ronald Reagan.

It is a new coalition, principally because of the change in the way Americans view gay rights.  As recently as 2004, reluctance to accept equal rights for gays could have been enough to tip the balance against the Democratic Senator from Massachusetts which had the only gay marriage law in the country at the time.

That this coalition is new as well as enduring is underscored by the dramatic change in attitude by Republicans who sensed hours after the November election results were in that they needed to reappraise their approach towards immigration. 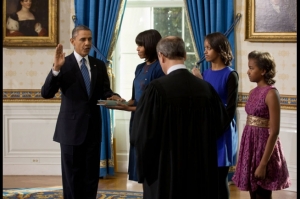 President Obama is aware of his role in making history, each time he refers to being on its “right side.”  His reference in his inaugural speech to acting for “posterity” means that he will continue make history in this second term.  The White House web page right now has a pop-up, extolling his coalition to “Help ake history.”

He can’t help it.  He makes history every day, just by getting up and going to work.

This entry was posted on January 24, 2013, 11:26 am and is filed under History in our surroundings, Public Affairs. You can follow any responses to this entry through RSS 2.0. You can leave a response, or trackback from your own site.